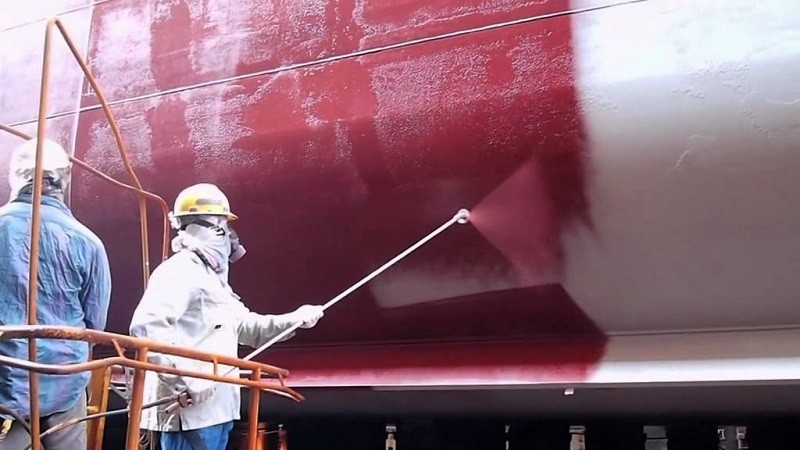 The Facts About Anti-Fouling Paint: Keeping The Hull Clear

Ships are much more complicated than we give them credit for, as it takes a lot more than a bit of buoyancy and a propulsion system to sail the world’s oceans. Most of our planet is made up of water, and throughout history, ships have been the primary form of both travel and cargo haulage.

Of course, ships are incredibly complicated pieces of machinery that have countless components. There is a key part of all ships that many people don't consider due to its lack of glamor, however: it's anti-fouling paint.

While other parts of a vessel, like the massive brass propellers, may seem more impressive, anti-fouling paint keeps a ship running smoothly. In this article, we are going to be examining antifouling paint in detail, from its composition all the way down to what it does to improve a ship’s performance.

What Is Antifouling Paint?

If you’ve ever taken a look at a ship in drydock, it is likely that you’ve noticed the dark paint that covers the underside of the hull. When first applied, the paint has a distinctly orange hue to it, though once it has been in the water, it will start to turn a brownish grey.

This dark paint is referred to as antifouling bottom paint, and it is used to prevent the hull of a boat from fouling. You may be wondering what this term means if you are a relatively new sailor, and it’s a catch-all term that references growth on the hull of a ship that has resulted from sailing.

Keep in mind that the world’s oceans are all massive ecosystems. The sea is so brimming with life that it is essentially a giant colony of both micro- and macro-organisms. As you can imagine, a ship traveling through this biologically-rich environment will eventually come across some substances that latch on.

Throughout history, fouling caused a wide range of issues, such as the reduction of the speed of a ship through drag, the gradual destruction of the hull, and more. Eventually, methods were developed to prevent fouling, such as bolting sheets of copper to the hulls of ships, and more.

Unfortunately, while metal diminished the number of hangers-on that attached themselves to wooden ships, it was found that they were still present in significant amounts after a few voyages. While copper was highly resistant to fouling, iron was not, and more and more ships were starting to use it.

Boat antifouling paint is the natural progression of this practice, and it was first developed around the end of the 19th century, though it took until around 1950 to master the composition of this paint. Antifouling paint is typically made out of materials that are closely related to copper, as it creates a lethal substance on contact with algae and similar organisms.

Anti-fouling paint has the advantage of being applicable to any material for the prevention of fouling. Unlike copper sheets which need to be attached to the hull, antifouling paint doesn’t greatly increase the drag of a vessel, keeping the speed relatively constant.

There are two main types of antifouling paint, and the choice often depends on the kind of ship that needs to be painted. The first option is “soft” paint and the second is “hard” paint, neither of which are to be taken literally.

Soft paint is also referred to as the ablative variety of antifouling paint, and it is the more affordable option. This kind of paint is mainly used on speedboats, sailboats, and other vessels that aren’t typically employed in industrial uses. Soft paint usually needs to be reapplied every couple of years.

This kind of paint works by sliding off of the hull of the ship gradually whenever it comes into contact with organisms. As bits of the paint come off of the ship, so do the algae and barnacles that were attached to them. Unfortunately, this form of antifouling paint is very unfriendly to the environment.

Any non-ablative form of antifouling paint is referred to as hard paint, and different manufacturers have their own designs. For example, some kinds of paint will have pores into which the biological matter can attach itself and then the pressure of the water passing by will suck it right back out.

Other kinds of hard antifouling paint will be too slippery for substances to attach themselves to in the first place. These kinds of paint will rarely ever have to be reapplied since they are designed for longterm use in commercial vessels. This kind of paint is often referred to as marine antifouling paint. How Long Does Antifouling Paint Last?

As we mentioned, the duration that your paint lasts will depend on what kind of boat you have, where you sail, and the type of paint that you purchased. If you are a recreational boater, then it is more than likely that you have used soft antifouling paint, which will need to be replaced within three years.

Commercial vessels can go far longer without needing to be repainted entirely, though the antifouling will often be touched up when the ship goes into drydock.

Can You Apply The Antifouling Paint Yourself?

Our readers often ask us whether or not it’s possible to apply antifouling paint alone. It certainly is, but you will need to follow proper precautions while painting to ensure that you don’t inhale any of the toxic paint fumes, as they can be extremely harmful.

As you can see, antifouling paint has come a long way from the days of nailing copper sheets to the side of ships. Thank you for your time, and we hope that this article has been able to inform you about how ships prevent fouling.